The Violin and the Viola are both members of the string instrument family, they look quite similar and are both held under the chin and played with bows.

The first known maker of both violins and violas was Andrea Amati who began making these instruments in the early 16th century.

The earliest forms of violas and violins were used to copy the soprano and alto voices of operas and early choral works, and were then transformed over time into our modern day versions.

While the two instruments look alike and in fact are close cousins, there are quite a few differences that make them stand out from each other with equally strong and unique voices.

Let’s take a look at the 5 main differences between Violas and Violins.

Put a violin and viola side by side, and you will quickly see that the viola is larger than the violin. The typical sizes of viola bodies range from 15” up to 18“ in length, whereas violin bodies average 14” for a full size instrument. 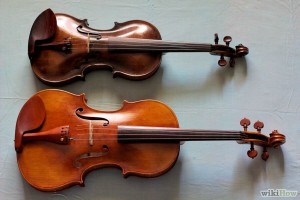 The viola is also wider than the violin. There are actually nine different sizes for violins compared to violas, which come in 4 main sizes.

Another big difference in the violin and the viola is the clef that it is played in. Viola is a mid-range alto voiced instrument, and is the only string instrument to use the Alto Clef for notation.

The middle line of the Clef symbol is the note C, and that is why we call this the C Clef, or Alto Clef. Once you know where middle C is, you can determine the other notes up and down the staff.

The Violin is played in the Treble Clef, and is the highest ranged stringed instrument in the family. Violins are known for being the “soprano” voice of any orchestra or ensemble.

As with the C Clef, if you look at the note in the middle of the bottom circle on the treble clef sign, we have the note G, thus the Treble Clef is also known as the G Clef.

From the G note, we can count down and find middle C, and any other notes above or below that.

♩ Sometimes Viola music will contain notes that are in the treble clef, so many violists actually know how to read both clefs.

Both the viola and violin are stringed instruments and primarily use just 4 strings to be played on. (Electric violins and violas can have up to 6 strings) The strings on both instruments can either be tuned with the fine tuner on the tail piece or the peg that’s down in the peg box.

♩  The strings used on each instrument are not all the same.

The fact that the Viola plays in a lower range than the violin is exactly what attracts many of its players and fans.

Because the strings are different on each instrument, the range of notes varies as well, and this is one of the most distinctive characteristics that separate the two.

A viola can sound notes that are 4 steps lower than the lowest note on the violin. This range of sound puts the viola right in between the violins and the cellos.

This is why the Viola is used as more of a harmonic type of instrument in most symphonic literature, rather than a solo type, like the violin.

Violins most often play the melody line in orchestral and ensemble music, at least in the string family.

Violins can go up higher than violas, since they have the E string, and this ability to play notes in the higher ranges qualifies it for a more solo type of instrument because it has the closest resemblance to the soprano voice.

The Viola has a deeper and mellower sound than the violin, due to the lower C string and the notes that can be played on it.

There are many notes that are shared by both instruments, such as the notes on the G, D, and A strings, but when they are played on a Viola, they still sound different and carry a more somber tone, because the viola is larger and the strings are thicker.

Violas often are used in symphonies and chamber ensembles to provide more rhythmic and harmonic elements rather than melodic and lyrical lines.

There are not as many violas as there are violins in ensembles. If you notice in a symphony orchestra, there are two sections of violins; the first and second violins, yet there is only one viola section. In fact, the violins are the only string instrument to have two sections in a symphony.

That’s because the violins almost always carry the melody line in the music. You can compare the violins to the lead guitar in a band, or the soprano voices in a chorus.

♩ Here are some samples of what each instrument sounds like.

♩ So Which Came First: the Viola or the Violin?

There will always be some argument about this question, depending on who you are talking to. The original stringed instruments in the 15th century were called Viols, or viola da gamba and were most like our modern day cellos, as they were all played by holding the instrument between the legs.

These instruments were then adapted so they could also be played by holding the instrument under the chin and with one’s arms.

These newer instruments, called viola da braccio became what we know today as the modern violin and like their earlier relatives, are most always used for the higher lyrical lines in music.

Some believe that the viola came first because all of the original stringed instruments were called viola + something, such as viola da gamba.

Once instruments started being held upright and under the chin, they evolved through many different stages into the violins and violas that we know today.

There is no definitive proof that the viola came first, but considering that the original instruments were all played like a cello, and then gradually transformed to be able to play higher ranges of notes, it seems logical to conclude that the Viola probably did come first and that the violin was birthed out of the different transformations to achieve higher note ranges and a more soloistic sound.

By keeping these five differences in mind, it will be easy to tell if you are looking at or listening to a viola or a violin.

The larger size of the viola is the main visual hint if you are comparing the two by just looking at them.

You can also spot the viola section in most symphonies as they are located in between the cellos and the 2nd violins.

You can recognize the violins by the higher notes that they play as well as hearing them play most of the melody lines in a piece or a symphony.

They are always located on the front edge of any symphony or chamber ensemble, and there will be either two sections of violins, or there will be two violin players in a quartet.

Musicians can differentiate between the two by noting what clef the music is in, and by hearing the difference in sound quality in the strings and the note range of the instrument.

There are incredible aspects to each instrument in the way that they sound and are played, and their unique voices add invaluable beauty to any piece of music.

♩ Why are viola jokes so short? So violinists can understand them.