There are so many excellent cello pieces that you could argue over the greatest ones all day and never reach a consensus, but there are definitely a few that seem to always make it onto everyone’s all-time favorite lists.

There are some that are so well known they are almost synonymous with the instrument, but we’ve included a few that the casual listener might not be as familiar with. 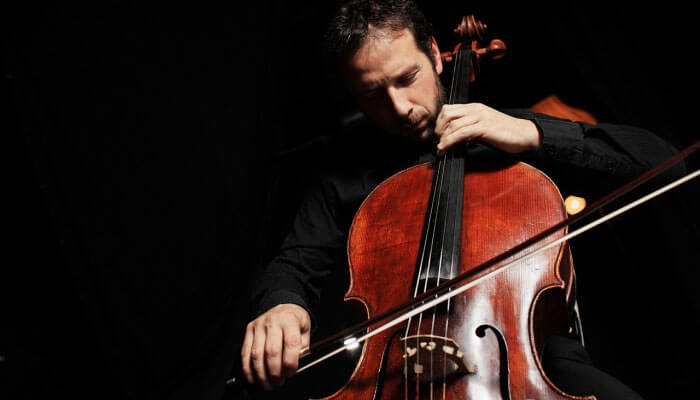 The cello is an amazing solo instrument, its voice almost human in quality. Its rich sound is incredibly moving.

There isn’t one type of music that suits it best, and its greatest compositions range from melodic melodies to fierce, passionate concertos.

If you’re a fan of the cello, or just getting introduced to classical music, these pieces are absolutely necessary to know:

It wouldn’t be a list of the greatest cello pieces without the Bach Suites. Johann Sebastian Bach composed his six suites for cello sometime between 1717-1723, but for almost 200 years they were not widely performed.

It wasn’t until the great Spanish cellist Pablo Casals recorded his interpretation of them in the 1930s that they took off.

Now, every cellist must learn the Bach Suites. Every great soloist has their own interpretations, and there have been hundreds of different recordings.

Casals paved the way, but recordings by János Starker, Yo-Yo Ma, and Mstislav Rostropovich are just a few other excellent versions.

The Prelude to the first Bach suite is probably the single most famous cello piece in existence. It’s been heard in films, commercials, and concert halls for decades now. Even if you don’t know its name, you’ve heard it.

What makes the Bach Suites so special? They are some of the most technically complex pieces ever written for the cello, and yet the sound they produce is melodic and accessible to the everyday listener.

Additionally, the surviving manuscripts had little to no annotations, and because of that they have been interpreted and reinterpreted by thousands of musicians. They can be completely personalized, which makes every performance different.

The Swan, written by Camille Saint-Saëns in 1886, is one of 14 parts of “The Carnival of the Animals”. The suites were written for fun, meant originally for a private performance.

Saint-Saëns actually felt that they were too childish to be performed, and he would not allow them to be played except in private during his lifetime. The only piece that he released was The Swan.

The Swan was a breakout success, and for good reason. It’s is not an incredibly technical piece, but there are few pieces in the cello repertoire that are as beautiful.

When you listen to it you are transported to the surface of a lake, and the cello seamlessly embodies the majestic bird in an unbelievably realistic way.

The dreamy piano creates the sense of ripples on the water’s surface, and the notes seem to soar right off the cellist’s strings as if taking flight. Additionally, the piece is an absolute joy to play.

For musicians, The Swan’s deep, sweeping emotion is always an exceptional experience. Listening to it puts you right there in the heart of the swan itself.

The opening notes of Edward Elgar’s Cello Concerto put you on the edge of your seat immediately. The arresting first chords are incredibly powerful.

The piece is synonymous with Jacqueline Du Pré, whose incredible performance made it an instant classic that has now been performed countless times by virtually every popular cello soloist.

Her performance was said to be so great that her teacher, Mstislav Rostropovich, quit performing it after hearing her interpretation.

Elgar’s Cello Concerto came from a place of deep sorrow. Elgar finished the piece in 1919, suffering from a serious illness and reeling from the destruction of World War I.

You can feel his distress and emotional turmoil in the music, and it’s that raw emotion that makes it so exceptional. This is a piece that is beautiful as a recording, but is even more captivating when heard live.

Franz Schubert’s Sonata in A Minor for Arpeggione and Piano, D. 821

Franz Schubert’s Arpeggione Sonata was originally written for the Arpeggione, a sort of hybrid guitar that was played with a bow.

The Arpeggione experienced fleeting popularity in the 1820s, but it didn’t have any staying power.

Schubert wrote the sonata shortly after the instrument’s creation, and it remains the only major work originally composed for it.

The Arpeggione fell out of favor, but the piece was reworked for cello, and sometimes viola. It has become one of the most interesting pieces a cellist can play.

The song is beautiful, but what makes it so special is its whimsical technicality.

Originally written for a six-stringed instrument, its complexity and wide range make it quite challenging. It’s a genuinely fun piece to listen to.

Camille Saint-Saëns’ Cello Concerto N. 1 is considered by many to be the greatest cello concerto. It sets itself apart from so many other great works.

Unlike most concertos, which consist of three movements, Saint-Saëns wrote his concerto continuously.

Its one long movement can be broken down into three parts, but Saint-Saëns’ composition is not meant to be notably divided.

The cello is the undisputed star of this piece, and the backing orchestra never overpowers it. It is extremely difficult to play, and is an absolute pleasure to watch live.

Antonín Dvořák’s Cello Concerto was the last concerto he wrote. Along with Saint-Saëns’ Concerto N. 1 many consider it to be the greatest work written for cello and orchestra.

Johannes Brahms, who had a great influence on Dvořák, was blown away when he first heard it. He’s thought to have said, “If I had known it was possible to compose such a concerto for the cello, I would have tried it myself!”

What makes it so special? Dvořák was able to harness the sound of the cello in a stunning way. There is something adventurous about the piece, with the orchestra sweeping in to play the theme first.

The cello comes in a few minutes later, with anticipation high. The piece is very difficult, with numerous double stops and a wide octave range.

When the cello takes over the theme it manages to play it with greater force than the entire backing orchestra, absolutely commanding the stage.

There are numerous excellent recordings and live performances of Dvořák’s Concerto, although our personal favorite is Rostropovich’s version.

He seems to focus on each and every note with a sense of fiery passion that is practically unrivaled.

This list barely brushes the surface of what’s out there, but if you’re a fan of the cello or a new student these are the perfect place to start.

They’ve inspired thousands to take up the cello, and created new fans of classical music with their extraordinary beauty.

Seek out other recordings and determine your favorite performances.

It’s a fun challenge that makes getting to know these pieces an even greater pleasure.