Typically during the production process of an album, the band will record all their parts that they’ve prepared for each song. From there, a mix engineer (or producer if you can’t afford a separate mix engineer) will edit and mix the recorded tracks.

Mixing is the process where the mix engineer or producer sets the tracks at the correct volume levels and applies effects through VST plugins.

To break it down, let’s take a look at the many things that may or may not happen during a mixing process.

Editing of tracks, including but not limited to:

Mixing is a step that should not be taken lightly. In order to get a clean mix where all the vocals and instruments sit nicely, great care should be taken and it’s ideal if you pay great attention to detail. It is crucial to get as many things right in the mixing process, as your mastering process depends on it.

It is important to remember that you should mix with your ears, not your eyes.

Beyond using the mixing process to clean up recorded audio and focus on the technical side of things, mixing can greatly influence the creative process. For example, we see this with remixes. A remix can be completely different than the original mix one has started out with. A mix engineer is sometimes seen as being almost like another band member, as they do have a lot of creative input on the final sound of a song or album.

Mastering is quite the opposite of mixing. Mastering happens after all the tracks of an album have been fully mixed.

If you want a more textbook definition, mastering is the process of refining mixed songs on an album so that they all work well together in an album format.

It is important to remember that when mastering, one is meant to make very subtle changes rather than applying dramatic effects, which should be done during the mixing process. Typically, a mastering engineer is brought in for this, so that a new, fresh set of ears is used for this important part of the production process.

During a mastering engineer’s process, he or she might apply the following effects:

No matter what, whether you’re working with a single song or a whole album, a limiter will almost always be used in the mastering process. With the mastering process, it’s very easy to do too much, so you should focus on doing barely anything. This might sound counterintuitive, but if you already have a great sounding mix, what more do you need?

Different formats usually have different volume standards (called LUFS) so before a track or album can be put on CDs and streaming platforms like Spotify or Apple Music, there needs to be a final version of each song for each proper volume level standard.

Now that you know the difference between mixing vs. mastering, you won’t have to worry about getting confused or mixed up the next time you’re in the studio or talking to your music producer friends. Mixing and mastering can get confusing at times, but make sure to check out other articles on our website to avoid any potential mishaps. 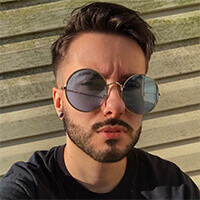 Jordan is a music producer, content creator, writer, and session musician. He has been producing music and engineering live performances for over 7 years. He is an experienced guitarist and enjoys listening to and playing many different genres of music.