The banjo’s story has no definite beginning. Now associated with Appalachia, bluegrass music, and complex picking, the banjo can trace its roots all the way back to 13th-century Africa, if not farther.

Along the way, it has evolved from its beginnings as a rustic instrument made entirely of natural materials to the modern, metallic instrument known for its trademark twang.

With players all around the world developing new ways to use the banjo, its story will surely continue in new and unexpected directions for years to come.

The earliest known accounts of instruments like the banjo come from sub-Saharan Africa in the 13th century.

But given the lack of records from that time, we can assume that similar instruments existed in that area even earlier.

These African predecessors to the banjo did not come to the New World physically. Instead, they came in the minds of African slaves, who were forcibly removed from their homes without their possessions.

They remembered how to make the instruments of their home cultures, and when they arrived they made them from the materials on hand.

These slaves were first taken to the Caribbean, so the first accounts of banjo-like instruments in the New World come from the island plantations.

As the practice of slavery spread to the mainland, however, African music and the banjo spread there as well. 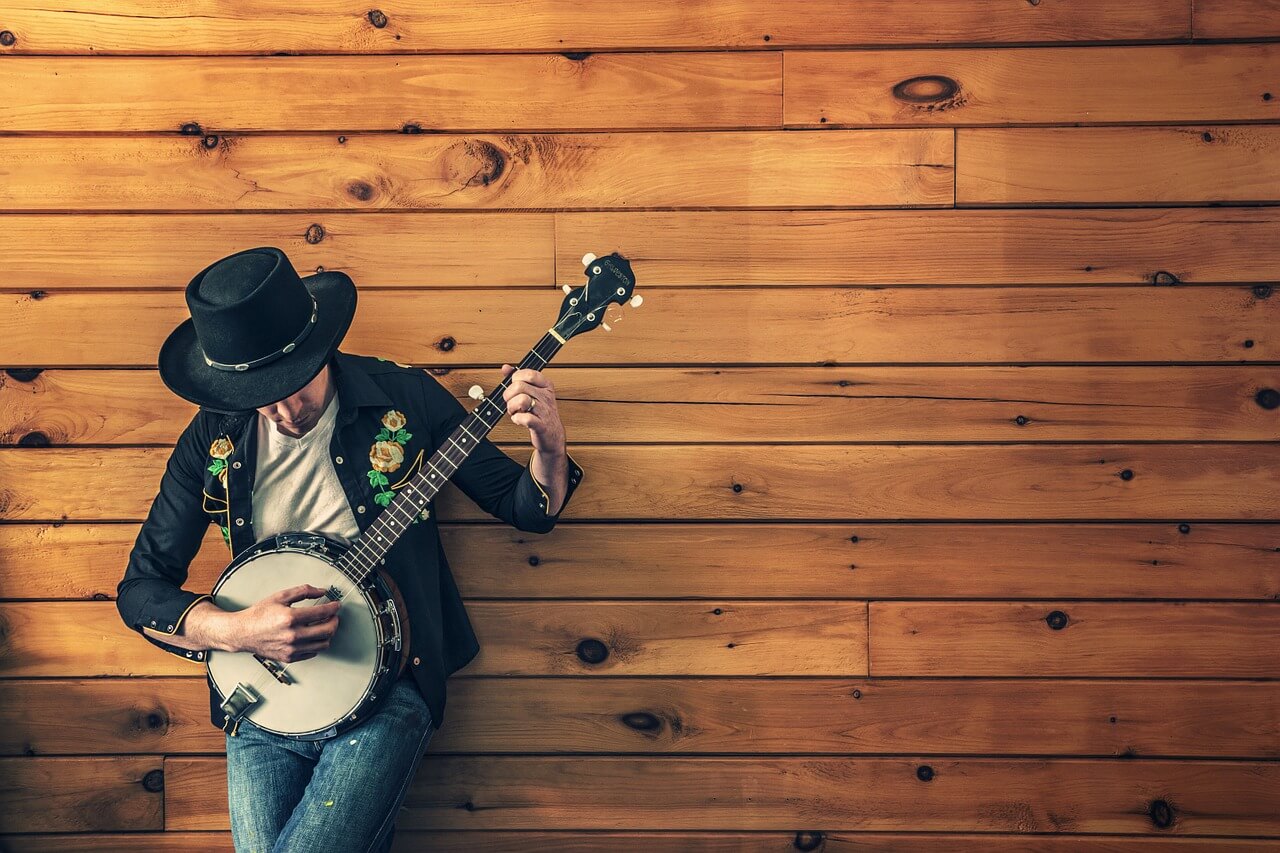 Slave masters realized that their slaves’ preferred instruments, drums, could be used to communicate between plantations and to help plan insurrections.

They therefore banned drums, leading other instruments, particularly the “banjar” as it was then called, to become much more common.

The materials used to create a banjo were simple: a hollowed-out gourd, a wooden neck, an animal skin to cover the gourd, and strings made from horse hair, animal gut, or another similar material.

Early banjos had no frets, three or four heavy strings, and a deeper, mellower sound than modern banjos.

We know that the banjo had spread relatively widely by 1781, when Thomas Jefferson described the slaves on his plantation, writing, “the instrument proper to them is the Banjar, which they brought hither from Africa.”

Before long, whites began to learn to play the instrument from their slaves and free blacks, particularly in the Appalachians, where banjo heads typically were made from groundhog skins.

The spread of the banjo sped up rapidly in the 1830s and 1840s, when white musicians like Joel Sweeney and Dan Emmet popularized a form of entertainment known as the minstrel show.

They performed music crudely mocking African-American culture in many cases, appearing with burnt cork rubbed into their skin in a practice known as blackface. Their bands typically consisted of a banjo, a fiddle, bones, and a tambourine.

By the 1840s, hundreds of minstrel troupes and formed and could be seen across the United States and beyond. Joel Sweeney even played the banjo for Queen Victoria in England, where he laid the foundations for the instrument’s continued popularity to this day.

The minstrel shows brought with them a more modern banjo with several important developments, most important among them the fifth string. As production techniques became more sophisticated, performance techniques such as rapid-fire picking followed suit.

During the Civil War, banjo players entertained the troops on both sides. After the war, many white musicians tried to disassociate the banjo from the lowbrow entertainment offered by blackface minstrelsy.

Virtuoso banjo players would even tour as solo acts, playing classical concertos with piano accompaniment in the late 1800s.

By the early twentieth century, vaudeville had replaced blackface minstrelsy as the popular entertainment of the day, but the banjo remained a major part of many comedy acts with jokes, funny songs, and general entertainment.

Meanwhile, in the rural South, the banjo continued to grow in popularity as a folk instrument, and immigrants from Europe played versions of folk music from the old world on the banjo.

Regional styles of playing evolved over time, such that the first big star of the Grand Ole Opry, Uncle Dave Macon, could play in as many as 17 distinct styles.

The music of this time was called “hillbilly music,” a term encompassing the predecessors of both country and western music and bluegrass.

Also in the South, the banjo played a crucial role in the development of early jazz music and the blues. Jazz bands in New Orleans and elsewhere generally favored the banjo over the guitar in the rhythm section in the early years.

Even the early jazz musicals of the 1920s in the northeast used one or more banjos in the orchestra.

The Great Depression, however, led most jazz bands to move to the guitar, which was about one-third as expensive as a banjo.

Modern day bluegrass music solidified as a genre in the 1940s and 1950s. Its roots are in folk music from Scotland, Ireland, and England, played by settlers in the Appalachian mountains.

The bluegrass band’s instruments include the fiddle, the banjo, the guitar, the washboard, the mandolin, and the dobro, a guitar variant with a metal resonator.

The best-known bluegrass banjo player of all, Earl Scruggs (1924–2012), was responsible for truly popularizing the instrument nationwide, inspiring legions of followers who copied his technique and formed bluegrass bands from sea to shining sea.

In bluegrass, as in jazz, the musicians typically trade off improvisatory solos based on well-known tunes.

The banjo often played a more rhythmic and accompanying role in bluegrass, but extreme levels of virtuosity and complex techniques have evolved the banjo into a very capable solo instrument in the bluegrass community.

Since Earl Scruggs, the banjo has continued to make inroads in music from jazz to classical to world music. Protest musicians like Pete Seeger played the banjo in the 50s and 60s.

Béla Fleck has brought the banjo into contemporary jazz, fusion, and world music as a soloist, expanding the boundaries of possibility for the instrument.

Songwriters like Sufjan Stevens keep the instrument popular in the folk music community, and entertainers like Steve Martin harken back to the instrument’s comedic role going back to vaudeville and earlier.

Parts of the banjo

The modern banjo has two main sections, the neck and the pot assembly.

The neck begins with the head stock or peghead, a piece of wood whose primary purpose is to hold the tuners and provide a base for the strings. 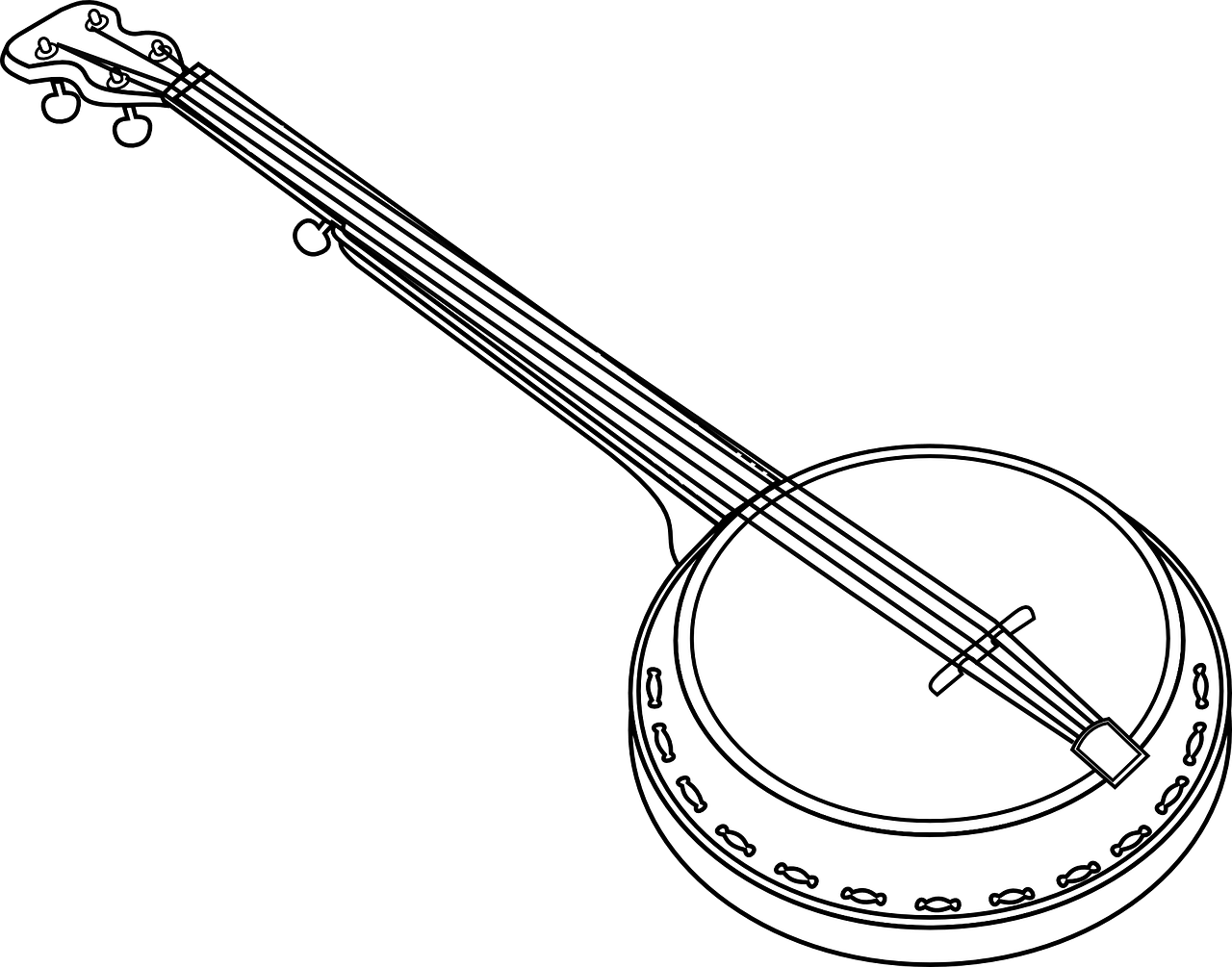 A banjo’s tuners typically stick out the back side of the head stock, except for the high G string, which is shorter and has a tuner on the side of the instrument’s neck.

On top of the neck is a hard piece of wood known as the fingerboard, which has frets and inlays mounted into the wood to create highly accurate pitches.

The other main component of the banjo, the pot assembly, resembles a drum and provides the banjo’s extraordinary sound projection.

The top, or head, of the pot assembly is a vibrating membrane, now made form Mylar but originally made from animal skin.

This serves as the instruments’ primary source of resonation, its soundboard. A moveable bridge holds the strings above the head.

The primary structural component of the pot assembly is the rim, a round piece of wood that provides a base for the other parts.

The head is held in place by a metal tension hoop, which goes over the head and can be tightened or loosened using a series of hooks and nuts.

Inside the banjo is a tone ring, which can be made from either metal or wood. The material used affects the tone quality of the instrument.

Some banjos have an open back; others, however, have an additional piece of wood on the back known as the resonator.

The resonator prevents sound from dissipating though the back of the instrument and projects the sound forward, providing a vastly stronger level of volume and enabling the instrument to cut through the bluegrass band.