Changing mandolin strings can seem like a challenge at first. Not only are there eight strings to change, but the instrument is small enough that things can get a bit cramped.

Luckily, with the right tools and know-how, you learn how to string a mandolin and get it sounding better than ever in no time. 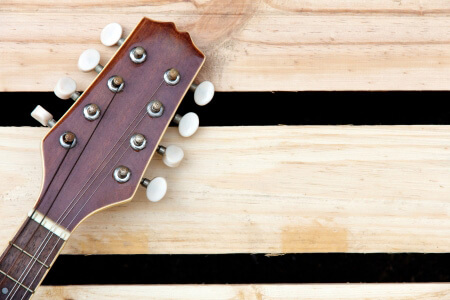 13 Steps to Stringing a Mandolin

Step 1: Clear a space to work on the instrument

Step 2: Turn the tuning peg on the mandolin’s head to begin loosening your first string

Step 4: Remove the string that you had loosened from its spot on the tailpiece

Step 6: Pull the string across the instrument and align it properly

Step 7: Push the string through the hole in the tuning peg

Step 9: : Cut off the excess string using your wire cutters

Step 10: Repeat steps 1–8 for each of the remaining strings

Don’t worry about tuning until you’ve replaced all eight strings – just make sure you put the right strings in the right place, for now.

Step 11: Stretch the new strings out

Now you know how to change mandolin strings, tailpiece and all!

When and why should you change your mandolin strings?

Sometimes you’ll know you need to restring the mandolin when one of its strings breaks.

That often means that the strings are brittle, so you’ll want to change them soon to make sure you don’t risk injury from another string breaking.

More often, you’ll have to judge for yourself when it’s time to change the strings.

Over time, the sound of your strings will grow more dull and uninteresting.

You may also notice the strings becoming discolored, particularly in certain places where the oil from your fingers frequently rubs off on them.

It can be hard to notice these types of changes because they happen gradually.

You might be shocked by how much the sound changes when you put the new strings on – it’s easy to forget exactly how a freshly stringed instrument sounds.

You’ll immediately get benefits in tone quality, response, and playability when you change your strings, so change them often to keep your playing fresh.

When you buy a new mandolin, you might want to change the strings right away.

If it’s been set up by a professional shop, the strings have probably already been changed, but if you bought the mandolin new out of the box, you’re best off changing the strings yourself upon receiving the instrument.

The manufacturer’s strings may have been on the instrument for a long time already – not to mention the wear and tear caused by shipping the instrument and the people who may have tried it out in the store.

What kind of mandolin strings should I use?

The type of strings you use can drastically alter the tone quality of the instrument.

As with buying an instrument, there is no right or wrong when it comes to picking strings.

It’s all about the sound you prefer – and how the strings interact with the sound of your mandolin.

The timbre of the strings is determined by their composition, or the metal used to make them.

Other metals like stainless steel, nickel, and copper have a darker tone, but also a richer bass sound.

Stainless steel strings have the additional advantage of being resistant to rust, which can quickly deteriorate the quality of strings made from other metals if you tend to sweat when you play.

The thickness of the strings, or gauge, affects their playability as well as their tone quality.

Lighter strings (which have lower gauge numbers) vibrate quickly and have a bright tone. They’re easy on your fingers, but they do not sustain as well as heavier strings.

Heavier strings sustain very well, but they can be harder to play with and will not have as bright of a tone.

Once you get more comfortable with the instrument, you may find that you like some strings to be higher gauge and others to be lower.

When it comes to brands, this is merely a matter of preference. Experiment with different brands until you find the best fit for you.

A final option available when buying strings is flat wound strings. This is a much more expensive option, but they do offer some benefits over standard strings.

Most standard strings are actually made up of a metal string that has another string wrapped around it.

Flat wound strings have much less wrapping, which means that they produce less noise as your fingers move across them and they are much easier to play.

If hurt fingers are holding you back from practicing, flat wound strings may well be a sound investment.